at the Bowery Poetry Club
(308 Bowery, between Bleeker and Houston)
$7, free to Poets House Members

This revolutionary volume represents the first book of its kind, a bilingual anthology dedicated to women working in modern and cross cultural poetry milieus.

Published in honor of the Festival of Contemporary Japanese Women Poets with support by NYSCA.

Blurring the Boundaries: A Conversation on the Art of Poetry and Translation
with
Rosa Alcalá, Ryoko Sekiguchi, & Cole Swensen, moderated by Rachel Levitsky

Takako Arai was born in 1966 in Kiryu City, Gunma Prefecture to a family involved in the textile manufacturing industry, a major industry in Kiryu. Her first book, Hao Bekki, was published in 1997, and her newest collection of poetry, entitled Tamashī Dance, is near completion. She was the editor of the journal Shimen Soka between 1992 and 1995, and since 1998 she has been a contributor to, and eventually editor of Mi’Te, a monthly publication featuring poetry and criticism. Arai has also been a contributor to several publications focusing on folklore and customs, as well as a series of writings on the poet Hagiwara Sakutarō, and the butoh dancer, Ono Kazuo. Arai currently teaches Japanese language to foreign students studying at the Center for International Exchange at Saitama University.

Cole Swensen is the author of eleven books of poetry including Noon, The Book of a Hundred Hands, and Goest, which was a National Book Award Finalist. She is on the faculty of the Iowa Writers’ Workshop.

Sawako Nakayasu was born in Yokohama, Japan, and has lived mostly in the US since the age of six. Her books include Nothing fictional but the accuracy or arrangement (she, (Quale Press) and So we have been given time Or, (Verse Press), and Clutch (Tinfish chapbook, 2002). She edits the journal Factorial, as well as the Translation section for HOW2, and in 2003 received the US-Japan Creative Artists’ Program Fellowship from the National Endowment for the Arts. Since then she has been translating contemporary Japanese poetry into English, and is also at work on creating an online database of Japanese poetry in translation. She is the recipient of a 2006 Witter Bynner Foundation poetry translator residency at the Santa Fe Art Institute and a 2006 PEN Translation Fund Grant for translations of Chika Sagawa and Takashi Hiraide, respectively. Her own writing has been translated into Japanese and Swedish.

Kyong-Mi Park (b. 1956) is a second-generation Korean living and writing in Tokyo. Since publishing her first book of poetry Sūpu (Soup) in 1980, she has continued to publish numerous works of poetry and prose in major Japanese publications including La Mer, Waseda Bungaku, Ginka and Asahi Weekly. She is noted for her translations of Gertrude Stein: The World is Round (1987) and Geography and Plays, (co-translation 1992), in addition to other translations such as Over the Moon by Mother Goose (1990). Her essays have been collected in The Guardian Spirit in a Garden: Words to Remember (1999), and There are always birds in the air (Goryu Shoin, 2004), while recent collections of poetry include That little one (Shoshi Yamada, 2003), and The cat comes with a baby cat in its mouth, forthcoming from Shoshi Yamada in 2006. In 2001 she participated in the exhibit Dialog 2001: Artists in Banff ( Canadian Embassy Gallery, Tokyo). Park’s work has been translated into English, Korean and Serbian, with English translations published in Aufgabe, Factorial, HOW2, and Green Integer Review. Park currently teaches at Wako University and the Yotsuya Art Studium.

Ryoko Sekiguchi was born in 1970 in Tokyo, and has lived in Paris since 1997. Her books in Japanese include Cassiopia Peca (1993), (com)position (1996), Hakkousei/diapositive (2000), Two Markets, Once again (2001), Tropical Botanical Garden (2004), all published by Shoshi Yamada. Since 1999 she has translated her own writing into French, including Calque (P.O.L, 2001) and Cassiopée Peca (cipM/Les compoirs de nouvelle B.S.), Héliotropes (P.O.L., 2005, Paris), Deux marchés, de nouveau (P.O.L., 2005, Paris), Série Grenade (Al Dante/Les comptoirs de la nouvelle B.S., 2006), as well as The Other Voice by Yoshimasu Gozo (Caedere, 2002), and other works by Japanese poets. Apparition is the title of a collaboration with Rainier Lericolais (Les cahiers de la Seine, 2005, Paris). She has also translated from Dari to Japanese the book Earth and Ashes by the Afghan writer and filmmaker Atiq Rahimi (Inscript, 2003).

Rosa Alcalá is a poet and translator. She teaches at the University of Texas, El Paso. She is the author of Some Maritime Disasters this Century.

Kiriu Minashita was born in Kanagawa Prefecture in 1970. Having commenced her poetic activities around the year 2000, she has come to be acknowledged as one of the representative poets of the “00 generation.” After receiving the Gendaishitechō Prize in 2003, she published her first collection of poetry, Sonic Peace, in 2005. The same book was awarded the Nakahara Chuya prize in 2006, also having been nominated for the H-Prize. In 2007, her second book of poetry, Z-limit, will be published through Shichōsha’s New Poets series. In addition to poetry, Minashita is known for extensive critical writings on literature, as well as numerous academic papers concerning topics such as health care ethics and welfare sociology. She also teaches courses on subjects which range from sociology and public policy, to philosophy and literature, at several universities in Tokyo.

Rachel Levitsky is a poet and teacher. Her books include Under the Sun, Cartographies of Error, Dearly, Dearly 3,4, 6 and The Adventures of Yaya and Grace. In 1999, she founded New York City's feminist avant garde poetry series Belladonna*.

erica kaufman co-curates belladonna*. she is the author of a familiar album, which won the 2003 New School Chapbook Contest. 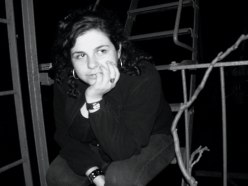